By Heiko Vermeulen – Permaferry, Co. Down

When I first arrived back in Ireland for my second stint in the autumn of 2014, I immediately put my feelers out to find my tribe, the permaculture community. I had lived in Italy for 10 years previously, running a small food forest and being much involved with the Permaculture Institute of Italy. I soon found myself helping organise the 2015 All Ireland Gathering, which was held at Tubby’s Farm in Hillsborough, County Down. It was quite a stressful time, I must admit. Whilst there was a mysterious group functioning as a national gathering steering group, we didn’t get to meet them and I wasn’t even sure who they were or what the gathering was meant to look like. It didn’t help that our local organising group dwindled at times to just 3 people. It all turned out grand on the day, as it always does, but I did have some sleepless nights during the run up.

When I finally got to meet the national team behind the gatherings, namely Suzie Cahn (who started the annual gatherings in 2011?), Hannah Mole and others, I floated the idea of a national permaculture association. I had felt frustrated as a new arrival to taking a lot of time to find my people and to receiving little support organising the gathering that year. I was told we weren’t ready for an association, there’s no interest for it, the self-organising nature of the gatherings was working well. As someone who had just come from the outside, I didn’t want to rock the boat and joined the national steering group instead.

The idea kept floating in my head though and I kept sowing seeds. I found that the ground wasn’t as barren and I got a lot of positive response. In 2018 we hosted the European Permaculture Convergence in the Wicklow Mountains and the need for an association became even more obvious to me, as fatigue was starting to set in within the still small steering group. The idea of no longer holding annual All Ireland Gatherings was floated, as it was always the same half dozen running them, instead having smaller regionalised meet-ups, based on the 4 historical provinces. Thus a small handful of us made the ‘Northern Gathering’ happen on Oxford Island on the shores of Lough Neagh, but as none of the other regions had got their act together, it effectively became the All Ireland Gathering again as people from all over the island descended on us, and consequently us northern lot unwittingly became national steering group, treasurers and website admins all rolled into one (the latter 2 roles being fulfilled by Steve Golembosky-Byrne of Lackan Farm).

Whilst the workload and responsibility to keep the popular gatherings going increased on fewer people’s shoulders, the whole process was also not particularly democratic or transparent for everyone else within the community. You may for example not be aware that each gathering generated a small financial surplus, which is being used as seed money for the following gathering. We now sit on some £2000 with nobody being held accountable. Whilst I always fancied a holiday to the Maldives, some kind of idea and decision making process of what to do with the surplus would be quite good. Here’s a doodle of my thought map as to how a future association might look like. These are of course only the ramblings of my mind. 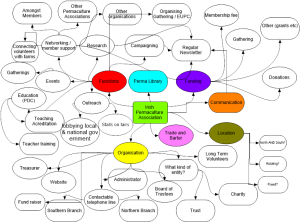 So at the beginning of 2020 I made it my mission to get the ball rolling. We were already starting to plan the gathering for this year and the original plan was to launch then, but then of course the world turned upside down. However after putting out a post on the Permaculture Ireland Facebook page, I received overwhelming support, with only a few people thinking that we already had an association. Since then we have had a number of Zoom meetings and have established a Slack on-line working group, which boasts around 50 people. We’ve been discussing functions, governance, education and teacher accreditation, funding and financing, land demonstration centres, setting up a newsletter and reviving this blog, maintenance of the existing web-site, establishing a ‘permaculture-grown’ certification, events etc…

We of course welcome anyone else who would like to get involved with any input or even better to join our group. You can also contribute by writing something for the blog or newsletter about your project or other relevant subjects. For further details you can contact us on organisation@permaculture.ie. Principle 8 of David Holmgren’s principles says: “Integrate rather than segregate”. Let’s build something together that grows the community and reaches out to change the world one mind at a time.